BRITISH INVASION at the Caloundra Events Centre This July 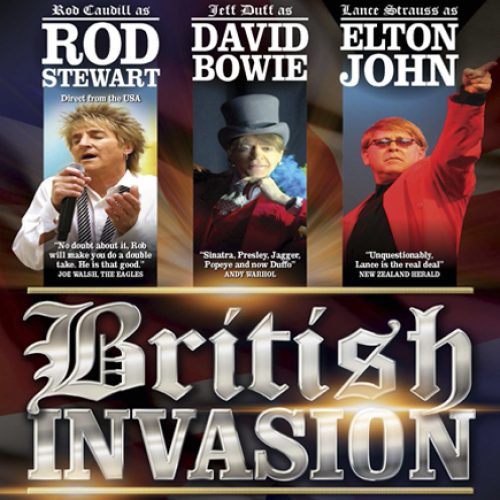 Don’t miss one of 3 of the best tribute acts in Australia coming to the Sunshine Coast this 2017! Fans of British music legends David Bowie, Elton John, and Rod Stewart will be kicking themselves if they miss the opportunity to watch British Invasion at the Caloundra Events Centre this July 8. Hear all the hits of your favourite music legends live and if as you’re listening to the real deal as these phenomenal tribute acts blow you away.

There’s a new concert in town and it’s about as British as it gets! This once in a lifetime show comes to the Sunshine Coast and you won’t be dissatisfied. Feel like you’re watching Rod Stewart himself as Rob Caudill sings and performs all of the greatest hits that you know. He’s been doing his incredible tribute show successfully for 15 years and Rod Stewart fans love him! Jeff Duff gives you 100% Bowie and his identical act and voice as entertaining as watching Bowie himself. Lance Strauss AKA Elton Jack has been tricking audiences for more than 25 years in over 15 countries with his Elton John tribute act. His uncanny voice will fool you too! Where else will you hear Bowie, Rod Stewart, and Elton John on the same night? BRITISH INVASION is a once in a lifetime opportunity that you can’t afford to miss! Coming to the Sunshine Coast at the Events Centre in Caloundra don’t miss 3 incredible tribute acts of 3 pioneering music legends. Mark July 8 in your calendars now!

Grab the opportunity for the perfect Sunshine Coast holiday now at https://bookings2.rms.com.au